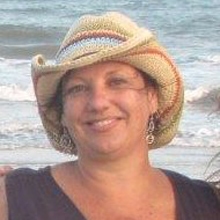 Julie Donie is the founder and partner of Fertile Ground Gardens LLC.

Julie first fell in love with plants at 6 years old in Houston when her first grade teacher took the class out to learn the wildflowers around her elementary school. Julie had several unsatisfying jobs after college. In 1997 with the birth of her first daughter, Julie had the opportunity to change careers. Remembering her early love of plants and the outdoors, she began horticulture courses in Seattle at Edmonds Community College. In 1999 a second child was on the way and her family was ready to leave the rainy Seattle weather. They returned to Austin and Julie completed the Travis County Master Gardener course and began working for a landscape maintenance company. Because she had small children at home, Julie did not want to expose herself and her family to synthetic pesticides and fertilizers. Thus she began a gardening business in 2001 with a commitment to building the soil and using organic methods. Julie enjoys getting to know clients and their gardens and observing as they change over time. 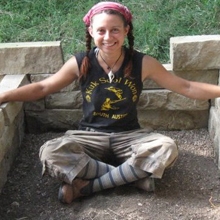 Alexa moved to Austin from the concrete jungle of Chicago wielding a relatively ineffective BA in anthropology and a high powered MBA, which slightly conflicted with her desire to never work in an office. She was instantly smitten with Austin and immediately began learning about the medicinal uses of the local plants. Through many hours of class work with Nicole Telkes of the Wildflower School, she learned how to identify plants, took note of what conditions they grew in and learned how to process them. While healing people wasn’t really her thing, working with plants was and she began working for Julie Donie of Fertile Ground doing landscape maintenance in 2005. After buying a house and realizing that she knew nothing about taking care of most expensive thing she owned, she began a second career on her off days as a construction worker, remodeling and repairing houses. After a few years she decided to take the knowledge she gained from construction about drainage and building and put it to use in designing and building functional durable gardens that showcase the inherent beauty of native plants. In 2008 Julie and Alexa teamed up as business partners and Fertile Ground became a full service landscaping company offering design, and installation as well as maintenance. Her love of the outdoors has really been the driving force to create gardens that will inspire people to go outside and love the space surrounding their home. 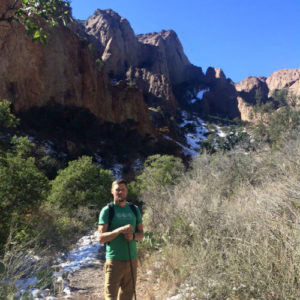 Originally from East Texas, Reed has been in Austin for nearly 20 years, with short stints living in Southern California and Northern India.  He holds BAs in History and Philosophy, and an MA in South Asian Cultures and Languages, all from UT Austin.  Reed has been with Fertile Ground since early 2013.  In 2014, he took over management of the maintenance gardens.

Blessed with a hardworking mom who could spit on the ground and grow spit plants, Reed has been working outside in large gardens since he was very young, sometimes against his will.  Hands in the soil most of his life, and growing up surrounded by the cathedral nature of the East Texas piney woods, Reed has a love and appreciation of all forms of life, even poison ivy and yellowjackets.

Reed is an avid enthusiast of organic soil building, regenerative gardening, small-scale farming, urban orchards, rainwater harvesting, composting, backyard food production, and more.  He is a certified Permaculture Design Consultant and Educator, having completed his Permaculture Design Certification (PDC) in 2012 at Quail Springs Permaculture in Santa Barbara, CA.  Reed has taught permaculture design both locally in Austin and internationally since 2013, most recently co-teaching a two-week PDC course outside Darjeeling, India in 2016.

Reed currently (proudly) resides in South Austin, where he lives with his wife, more fruit trees than he cares to count, and a small herd of domestic animals.

We often receive glowing compliments for our talented & diverse team. Owners feel comfortable with our expert gardeners, landscapers, & problem-solvers. Meet a few of them below.

Fertile Ground Gardens is always looking for positive, creative, responsible problem-solvers who share our vision of quality craftsmanship and excellent customer relations. We pride ourselves on having a diverse crew and welcome women, minorities, and LBGQT in our company. We offer competitive pay, paid vacation time, and the potential for profit sharing.

Fill out the contact form below to get in touch regarding open positions! We’d love to hear from you.